If you searching for a racket having a solid design with a lightweight swing feel then you must check out this user guide for complete detailed specification. We will provide you with notable features for increasing the performance bar to the next level.

You can switch to any criteria with this filtered list: 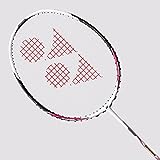 This racket has a 5U weight category which is the lightweight racket model designed by the company. Handling the racket will become easy without any wrist pain when played for a longer duration.

In most of the Voltric rackets, the grip size classification is G4 but it will create a slight difference with G5 grip size. It may take some time to adjust but racket lightweight smoothly overcome small glitch in any criteria.

The shaft is a medium flex which makes a racket flexible for any shot in a controlled and responsive manner. Despite medium flex, it is a head heavy racket which means it is heavier on the frame than the rest of the body which helps in making it more powerful.

It is designed for making ahead move in a controlled manner and shuttle hold on the string bed for a longer duration. The thin frame allows the frame to move and transfer more energy to the shuttle. This will help with instant power.

The voltric weight at the top and thin frame reduced the air resistance and improve the handling even further. Players can move full swing when required.

The T-joint between frame and shaft beneficial in terms of making the shuttle stable hit from any angle. The extra force is transferred to a string bed to transfer controlled force to shuttle for perfect angled shot from any direction.

The high elasticity carbon shaft with Tungsten and Graphite material provides a racket solid feel which is unbeatable in terms of durability and control.

This racket is perfect for defensive players who prioritize overall performance and focus on to justify every throw off an opponent. Voltric Z force rackets designed for smash shots and i-force is lightweight than any other racket present in the market with this combination for offensive and defensive play.

It is a combination of a head-heavy racket with a lightweight design for powerful control shots. The frame design is an Isometric shape having a large sweet spot for the perfect service from every angle. One will not afford to miss any shot and every serve is justified as the shuttle got enough space for an angled shot desired according to game demand.

Due to its tough design, it is great for smashes but it is flexible as of its weight then the net shot will not be an issue for advanced players. It doesn’t suffer the frame timing issue.

It is an overall performance racket without any fail in any shot when played with good technique.

Before any decision, you should check out its overall specification for a clear understanding as every field have its negative and positive end.

For whom it will be best?

Till now you have judged that it will be a good choice according to your expertise area but this racket is for overall performance who love to play aggressively. If your preference is offensive or defensive playing then this racket proves to be a good choice due to its lightweight and flexibility.

Intermediate players can choose this racket without a second thought but advanced players demand specific skill for the clear winner then should be more specific between speed or power. Advance players can search more option under the Voltric series for a smart choice.

This racket is considered the best racket under the Voltric series due to its power, accuracy, and feel. It will not suffer any frame disbalance issue. Racket will lack in the net shot but excellent who prefer to speed overall anything else in the game.

It is a combination of power and speed without compromising lightweight and easy to control. You can expect good smashes due to its tough material used for design and top head heavy technology with a medium shaft perfectly reduce air resistance for every complete swing.

This racket is easy to control for every shot who prefers the defensive or offensive style of playing. It is a deadly combination of Voltric Z force and  Voltric i-force series. You can check out this racket belonging to any expertise area in a Badminton game.

Badmintonracketz.com participates in the Amazon Associate program. We get a small commission whenever you purchase anything from our Amazon affiliate links.